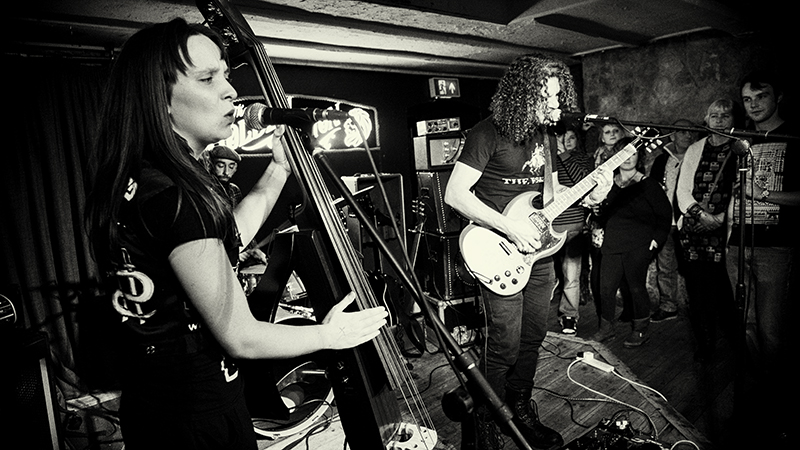 John Fairhurst is a much travelled and ubiquitous player (find out more here) and his Trio project is the current work in progress – terminating a short UK tour with a closing night in Bristol and recordings already planned for the New Year. The Trio have been road testing their songs, some already almost fully formed, some so new they don’t even have official titles. A packed Lion was treated to an exemplary display of technical expertise delivered with warmth, humour and passion, along with an ass shaking momentum that kept the whole room moving for the entire set. Fairhurst’s playing was on fire from the off as the band used the basic songs as launch pads for groovesome extended excursions to a uniquely bluesy funkiverse. And that’s the key to the Trio, they know how to make the blues swing, how to get you dancing. The trouble with a lot of blues based players & bands is that they miss the point of the music and either deliver flat, lumbering tempos or bludgeon the audience with heft but by contrast the John Fairhurst Trio have an enviable sense of dynamics. They specialise in blues based tunes that are nimble, light on their feet and yet often with considerable weight – Fairhurst gets you head banging while the rhythm section get you up on the good foot. 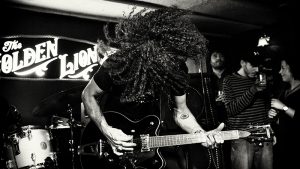 As for that rhythm section, Nina Harries was phenomenal throughout, stand-up bass plucked, slapped and bowed to provide supple rhythm throughout the night (and somehow managing to even make her bass sound like a Theremin at one point). At times she was an intense, fierce presence on stage with a “Don’t fuck with me” expression that would make Slayer shit themselves; but then also spent plenty of time laughing and enjoying the night, joining the on stage banter; grinning at the audacity of her band mates as the music twisted & turned; chuckling as songs were extended and jammed while the band followed their muse. Harries really came in to her own when the Trio played her composition Shoreditch Dickie an intricate funky jazz number that was as delightful as it was lyrically hilarious, dedicated to all present who had lived in Shoreditch but found themselves now Bristolian “…but you’re still from Shoreditch.” 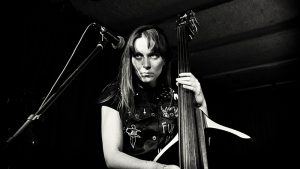 The songs worked well, the set had light and shade aplenty, mostly up tempo but with slower sides too and Fairhurst’s molasses dark gravelly voice is tailor made for both. We got nine or so generously lengthy tunes, including two instrumentals and if the studio sessions are as fiery as the live versions then we’re in for a treat next year. A topless Fairhurst saluted the crowd at the end of the show, genuinely moved by the raucous reception. The crowd were never gonna let the show end without an encore and sure enough the Trio returned for a rendition of Saltwater that can only be described as epic: a slow building ambitious tune; an autobiographical tale of redemption with multiple crescendos and easily the match of any of those rawk epics banned by the fashion police and discouraged in guitar shops. The band took their final bows with massive grins to a rambunctious round of cheering and still more calls for the band to play on. 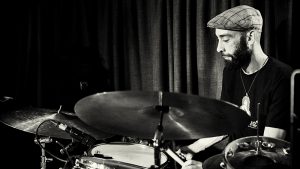 The performance tonight confirmed that Fairhurst is an outstanding bluesman but exactly what does make Fairhurst stand out? Well, we’ve a rich vein of talented players at all levels of the business all the way up to players selling out the Colston Hall locally and similar sized venues across the Nation – including the Albert Hall. Sure all of these players are talented, they’re well versed in the tropes & form and have studied their predecessors. And yeah, they’ve got the tone, they’ve got the technique and they’ve sets full of blistering solos and wailing riffs, but what they’re not doing is advancing the genre and playing blues for the 21st century. They’re preaching to the converted and arguably treading water (albeit with genuine commitment and some cracking tunes), but Harries, Brito and Fairhurst are pushing the blues in to new unexpected places. You need to get on the ride, it’s gonna be a blast.